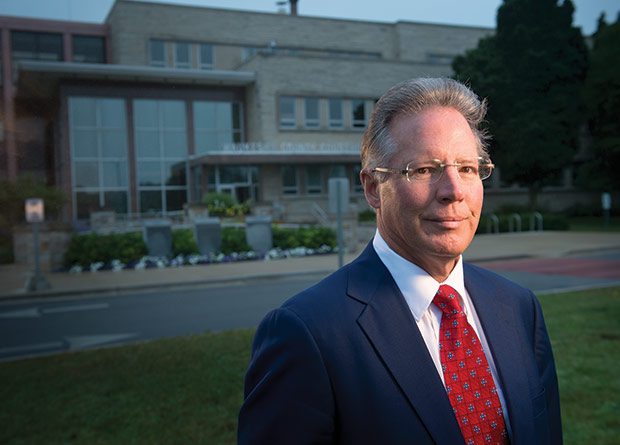 Mark Thomsen of Gingras, Cates & Wachs stands in front of the Waukesha County Courthouse on Friday in Waukesha. Thomsen, who has worked in personal-injury law for nearly 30 years, says he has recently found himself heading to court more often to ensure his clients in auto injury cases are fairly compensated by insurers. He says that may be one of the factors fueling a recent increase in auto injury lawsuits being filed in Wisconsin. (Staff photo by Kevin Harnack)

For decades, plaintiffs throughout the U.S. have been filing fewer tort lawsuits. According to recent news reports, about 10 out of every 1,000 Americans filed tort lawsuits in 1993. By 2015, the number was down to less than 2 in 1,000 Americans.
Wisconsin is no different. Tort lawsuit filings here have been steadily decreasing for more than 30 years. The trend is not unrelenting, though. For the first time in six years, there was an increase in tort filings in 2016; plaintiffs filed about 200 more cases that year than they had in 2015.

Stephen Daniels, research professor at the American Bar Foundation, said he and his fellow researchers, in a recent study of Texas torts filings, noticed a similar increase in auto cases in the last few years.

“The really interesting question is: Why the uptick?” he said. “God knows Wisconsin and Texas and Wisconsin are not the same.”
When Daniels asked plaintiffs’ lawyers to weigh in on the increase, there was no agreement on the exact cause. Some pointed to the strong economy, which in Texas has given rise to a higher number of accidents as trucks increasingly travel the state’s roads.

In Wisconsin, various defense and plaintiffs attorneys agree that last year’s increase – however slight – was most likely the result of the country’s economic strength. Plaintiffs attorneys also note that they’ve become increasingly likely to find themselves in fights with insurance companies over payouts offered to their clients in cases stemming from car wrecks.

Vehicle-injury lawsuits usually make up about two-thirds of all torts lawsuits filed in the state in any given year. And some of the biggest increases of the past two years have been of these types of suits. Forty more vehicle-accident lawsuits were filed in 2015 than in 2014, and 200 more in 2016 than 2015.

Daniels said it may be too early to tell, but the uptick in auto injury cases could be a sign that Americans are becoming reluctant to file lawsuits.

“For auto cases, we thought a lot of that didn’t come from tort reform from the state Legislature or  what the state supreme court did but in large part … from the ongoing public relations campaign demonizing tort and plaintiffs lawyers,” he said. “People were just not bringing suits.”

Travis Rhoades, a defense attorney at Crivello Carlson who is on the board of the Wisconsin Defense Counsel, the state’s civil defense bar, said one cause of these increases is fairly obvious: People tend to drive more when the economy is strong.

“And the more people on the road, the higher the number of accidents are going to be,” Rhoades said.

“I have more cases in suit that I would typically have,” Thomsen said. “They are auto cases where the insurance company is not making fair presuit offers.”

Thomsen and Wagner say they suspect the low-ball offers are coming from insurers who have outsourced their adjusters in order to keep costs down.

However, Paul Curtis, a defense lawyer at Madison-based Axley Brynelson, said his experience working on auto-injury cases has been different. Curtis said there is little to no evidence that his clients and others have been making unfair offers or hiring adjusters from out of state.

“I don’t agree,” Curtis said. “When I get my files in, I get the insurance company adjuster’s notes in them. Quite frankly, they’ve been offered a fair amount of money.”

Whatever the cause, the increase seen in 2016 comes as an anomaly amid decades in which tort filings have become less and less common.

In 1982, more than 10,000 tort lawsuits were filed  in state circuit courts. That meant that the 6,000 cases filed in 2016, even though marking an increase from the previous year, still came as a steep drop-off from historical figures. The past decade alone has seen the number of annual filings decrease by about 1,000, according to statistics from the Wisconsin court system’s yearly reports.

Some take both these numbers and the comparable national figures as signs that Americans perceive the civil-justice system as being inaccessible or unfair.

Wagner says part of his mission as president of the Wisconsin Association of Justice, the plaintiffs’ bar association, is to fight that perception by encouraging his colleagues to exercise their Seventh Amendment right to pursue a jury trial in civil cases.

“I firmly believe in the jury system,” Wagner said. “And the same potential jurors who may feel like the system is stacked against them are the same ones who might find themselves on a jury.”

Attorneys from both sides note that the steady decrease in filings can in part be traced back to legislation. In 2011, for instance, the state Legislature overhauled the state’s product-liability laws by increasing the burden of proof in design-defect cases and bringing back the open-and-obvious-danger defense.

Lawmakers also took steps to curb medical-malpractice lawsuits. Starting in 1995, the legislature capped the noneconomic damages that could be awarded in medical cases by setting a maximum level that changed every year based on the cost of living. A little more than a decade later, lawmakers placed a flat $750,000 cap on noneconomic damages.

State courts saw fewer than 100 of either type of lawsuit filed in 2016.

Rhoades and Wagner said torts lawsuits might be falling in number both because the cost of bringing suits has risen in recent years and vehicles have generally become safer.

For Rhoades, who specializes in product-liability and property-damage claims, said plaintiffs could also simply have become more cautious about filing lawsuits in the first place.

“I think what it means, at least in my practice, is that plaintiffs are evaluating claims more carefully in the presuit stages and (there is) more involvement of defendants in presuit claims,” he said. 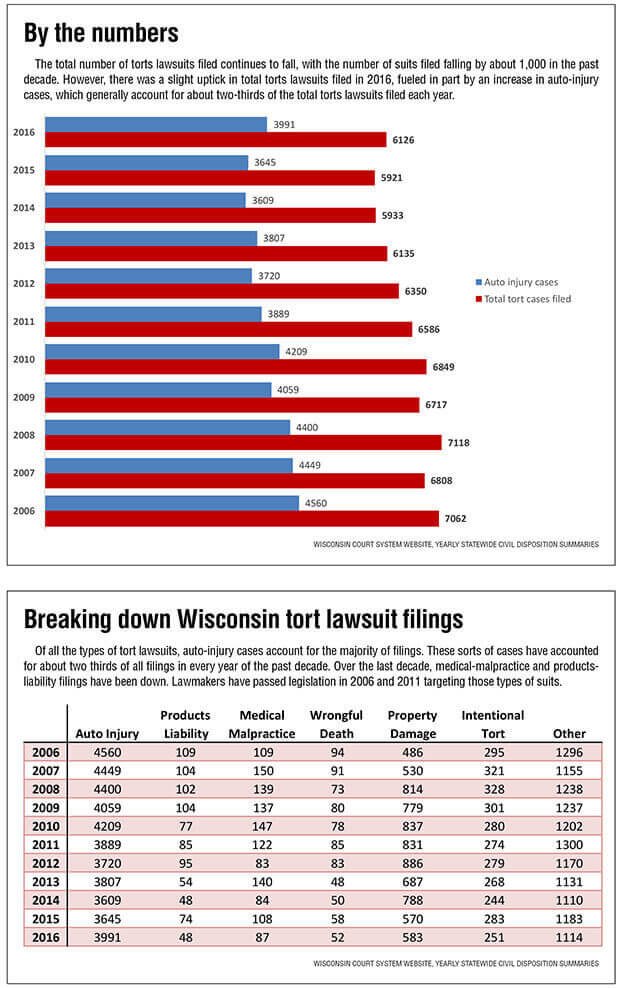