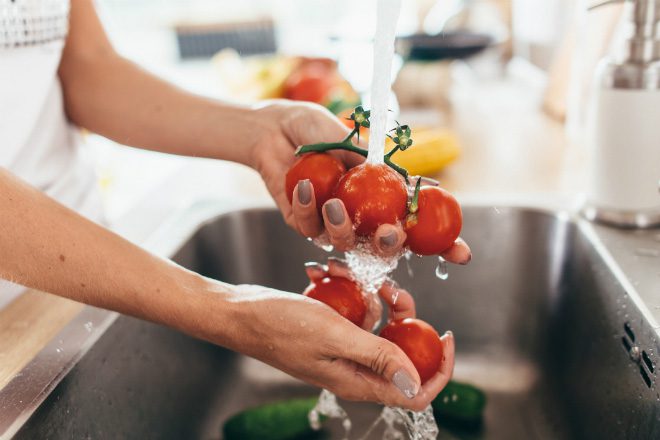 What Is Food Poisoning?

Food poisoning is an umbrella term for any kind of illness caused by food that has been contaminated by disease-causing “microbes” or “pathogens”. The Centers for Disease Control and Prevention (CDC), a government agency that monitors outbreaks of food poisoning, estimates that there are 76 million cases of food poisoning in the United States each year, most of which go unreported. According to the CDC, there are between 400 and 500 reported outbreaks of foodborne illness each year.

Although there are over 250 different types of food poisoning, they may be grouped into the following four broad categories:

How Does Food Become Contaminated?

Because the disease-causing microbes that cause food poisoning are invisible to the eye and nearly impossible to detect, it is easy to contaminate food without realizing you are doing so. As a result, there are many opportunities for accidental contamination. Here are a few ways that this can happen:

Although just about any food can become contaminated by secondary contact, the most common sources of disease-causing microbes come from animal products such as raw meat, poultry, eggs, shellfish, and unpasteurized milk. This hazard is greater whenever a particular food product, such as ground beef, comes from many different animals, increasing the chances that a given batch will include some contaminated meat.

As a rule of thumb, most disease-causing microbes can be eliminated by proper cooking. When preparing meals, any plates or utensils that come into contact with raw meat or eggs or other animal products should be thoroughly washed before re-use.

Although washing certain foods, such as leafy produce, is generally recommended, keep in mind that washing does not always rid contaminated food of all disease-causing microbes.

When eating out at a restaurant, you are more or less at the mercy of whatever precautions are taken in the restaurant’s kitchen, though most states have some sort of public health board that carries out routine restaurant inspections, often requiring restaurants to display their health inspection evaluation in a prominent location.

GCW Can Help You with Food Poisoning Claims

If you are a victim of food poisoning and think you may have a legal claim, consulting with an attorney may help you sort out the medical and legal issues as well as provide some insight into the strengths of your claim. Contact our GCW attorneys today to get more information about your food poisoning claim.