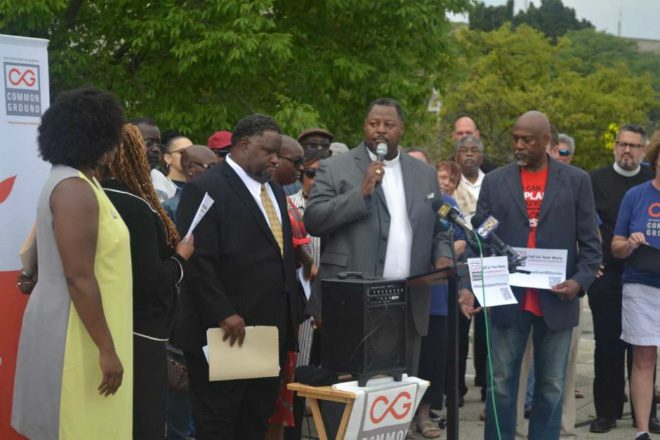 Two Milwaukee pastors, Demetrius Williams and John Patterson, have filed a federal lawsuit against Waukesha County for being allegedly racially profiled last May.

Williams and Patterson were on their way home from fishing in Rock County around noon in May of last year. They had pulled onto the shoulder of I-94 in Brookfield due to a flat tire on the boat trailer they were towing when a Waukesha deputy pulled up. Without asking if the men needed assistance, the deputies questioned Williams and Patterson about guns and drugs before demanding their licenses to check for arrest warrants.

“Had Plaintiffs been white this would not have happened,” the federal lawsuit alleges.

In August, a faith-based community action group, Common Ground, held a news conference to tell the pastor’s story, and ask if other drivers had these types of experiences with Waukesha County sheriff’s deputies. Another news conference was held Wednesday, January 9, 2019 at Community Baptist Church in Sherman park to announce the lawsuit.

“We want to let people know we don’t just have to take this treatment. We can push back and use the law to do it,” said Rev. John Patterson.

Williams and Patterson are represented by GCW civil rights attorney, Mark Thomsen. The lawsuit states that white deputies Erik Michalsen, and Michael Powell violated their Fourth Amendment rights to be free of unreasonable searches and seizures, as well as their 14th Amendment right to equal protection under the law.

The men seek unspecified compensatory and punitive damages for “emotional pain, suffering, inconvenience, mental anguish, loss of enjoyment of life, and other non-pecuniary losses.” Thomsen said his clients also seek an admission that the deputies were “not only legally but morally wrong.”