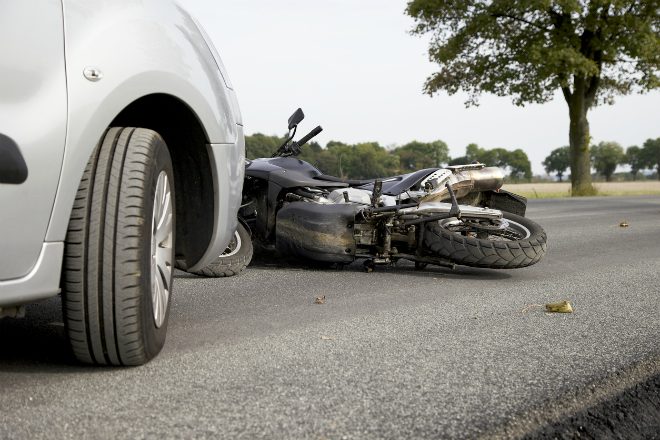 Motorcycles are small vehicles. If drivers do not check their blind spots well enough, they can easily merge into a bike in another lane. Motorcycles also may not be able to react quickly enough if the other driver fails to signal his or her lane change, either.

Other drivers should signal and check their blind spots, and motorcycles should do everything they can to increase visibility. Increasing visibility may include turning on lights or wearing brighter clothing or gear.

Because drivers are not on the lookout for smaller vehicles as they should be, they will sometimes turn left into or in front of a motorcycle. In fact, this type of crash accounts for roughly 42 percent of all motorcycle-car crashes.

When a car turns into a bike, the motorcycle may not have enough time to try to stop to avoid the crash, and even if they do, they may be thrown from the bike in the process. It’s very important for drivers to always keep an eye out for motorcycles.

When either the driver or the motorcyclist is impaired because of drugs or alcohol, the likelihood of an crash significantly increases. Alcohol slows reaction time and makes your hand-eye coordination much more difficult. It is hard for drivers to see motorcycles while they are sober—that only gets worse if the driver is impaired.

Poor road maintenance, debris in the road, and weather conditions all affect motorcyclists more than they do the average passenger car. A simple pothole, for example, may be annoying for a driver, but it can be deadly for a motorcyclist. Hitting road hazards can easily cause a motorcyclist to lose control of their bike.

When drivers or motorcyclists speed, they have less time to react to other vehicles, hazards, or emergency situations. Speeding is a factor in the majority of motorcycle crashes.

If you or a loved one has been in a motorcycle crash, you may have legal options. Learn about those options by speaking to a member of our team at Gingras, Cates & Wachs. Call today for a free case evaluation.