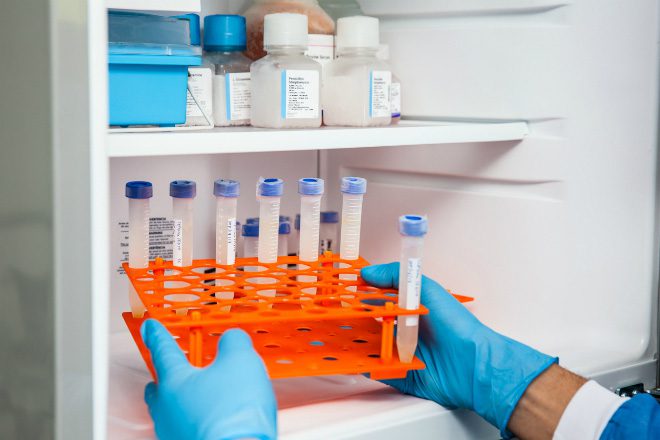 Although high-profile celebs like Gwyneth Paltrow have come out extolling the virtues of amicable divorce, the reality is that splitting up can be acrimonious and messy. The person you swore would be yours “in sickness and health” is suddenly fighting you tooth and nail over a timeshare in Disney, airline miles, and a vintage sofa.

And here’s something you might not be aware of. Frozen embryos — or “pre-embryos,” as they are also called — are considered personal property and belong equally to both members of a married couple, provided the husband used his own sperm to fertilize the wife’s eggs. Thus, a divorce settlement could impact your future ability to have a child.

In-vitro fertilization is a series of procedures used to assist couples in having a child. The procedure harvests mature eggs from a woman’s ovaries and combines them with viable sperm in a laboratory setting. If successful, IVF results in multiple embryos, which can then be inserted in the woman’s uterus.

Couples use IVF when one or both of them are no longer fertile. There are numerous permutations of the procedure. A woman may use her own eggs, an egg donor and her husband’s sperm, a sperm donor, or even a gestational carrier if her own uterus is not viable.

Moreover, infertility is not the only reason couples choose IVF. A fertile woman may harvest her eggs and have her husband fertilize them after receiving certain cancer diagnoses. Because the treatment reduces fertility, storing frozen embryos for insertion later on insures a greater chance of having children.

IVF and the Law

The law has been slow to adapt to the potential consequences of shared ownership where a future human being’s life may be at stake. Courts generally take the stand that one spouse cannot compel another to become a parent against their will, which gives the legal advantage to the person who does not want to have a child. Thus, some courts have ordered that pre-embryos in storage be destroyed as the result of a divorce dispute.

Moreover, agreements couples make with IVF storage facilities regarding the future use of pre-embryos are generally not enforceable. Until a doctor implants the embryo in a woman’s womb, either member of the couple has the right to change their mind.

However, in cases where the woman’s only chance at having a child biologically depends on the use of frozen embryos, the stakes are high, and courts are beginning to use discretion. While nothing is better than having a legal document that explicitly states both parties’ rights to the stored pre-embryos, the law today is not clear-cut on ownership, and more parties are suing for ownership of the frozen eggs.

Need clarity about your divorce agreement? Gingras, Cates, and Wachs is a team of compassionate and experienced Wisconsin attorneys who have helped clients over the years to navigate the complicated arena of family law. Contact our family law attorneys at GCW today for a free consultation to see if we can help you.